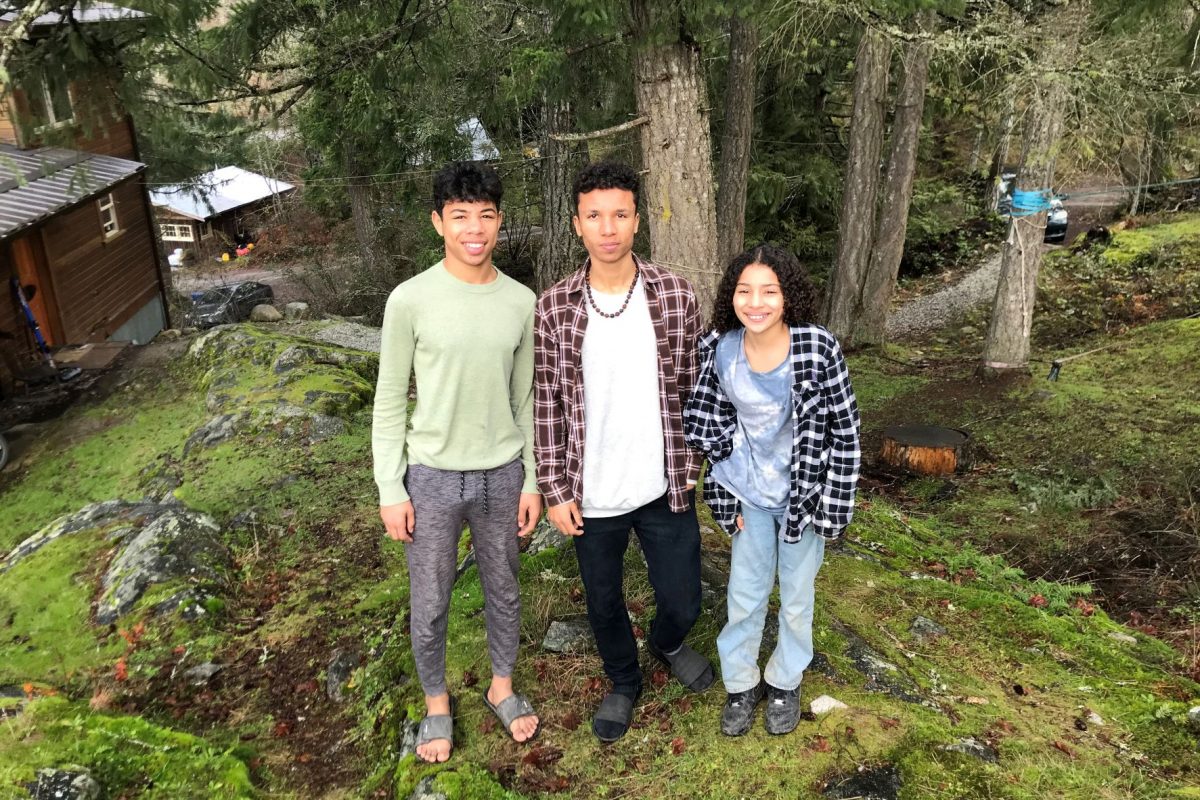 Keshua, Levi and Zyah Welch have a Grenadian dad and a Canadian mom with Dutch roots. They had a Canadian upbringing on Salt Spring Island, with the Grenadian humour of their dad and a touch of Dutch from their great-grandparents. Last year they had the chance to get to know their Grenadian heritage when they lived for six and a half months in the Caribbean.

The living room of the Welch family is regularly filled with laughter as Keshua, Levi and Zyah look back at their Caribbean adventure. Salt Spring Island and Grenada are both small islands – Grenada is twice the size of Salt Spring Island – but living there was a totally different experience. Going to church is a big part of Grenadian life and the school system was a bit of a shock. “I definitely appreciate school here more now,” says Keshua with a smile.

Hughson Welch and Hanna Munneke had been talking about it for years; taking their kids to the place where Hughson was born and raised. Keshua, Levi and Zyah were excited when it finally happened. “I really wanted to go because our family lives there and it is nice to see another place in the world,” says Zyah, the youngest of the three kids, who goes to school at Salt Spring Elementary, politely mentioning the right pronunciation of Grenada (gruh.nay.duh) and not Granada (gre.nah.duh), a city in Spain.

Her brothers – both in high school – felt the same about the trip. “Although I didn’t want to stay as long as we had planned for initially,” says Keshua. “That changed after a month though, and I was happy to be there as long as we were.”

Immersed in the culture

Keshua had been in Grenada twice. As a three-year-old with his parents, and four years ago when he stayed with his grandparents for two months. “That was a whole different experience,” he says. “I mostly spent time with my grandparents back then, I didn’t immerse myself in the culture that much, except for going to church. But I was excited to go back, to be in a warm place; no sub-zero temperatures, no snow.” Levi was in Grenada when he was a baby. “I didn’t remember anything and I was super excited when we finally went. I always wanted to know what Grenada was like.”

For Zyah, Grenada was all new. “I knew it was going to be hot, I knew that Christianity plays an important role in people’s lives and that there was a revolution between the seventies and the eighties. That’s why my grandparents left Grenada for a few years.”

Levi immediately had a feeling of belonging. “When we just arrived at the airport and we drove to our grandparents, I felt I was in wonderland. We were listening to Bob Marley on the radio, everything was so new and different but I felt I belonged there. Until I met the people. They really let me know that I didn’t.” Zyah: “They had a lot of assumptions about us. People in Grenada think when you have a lighter skin that you are a rich tourist.”

“Pretty much everyone thought we were loaded,” Levi adds. Keshua: “Very few people with lighter skin are part of the culture in Grenada and actually living there, so in a way, it was a fair assumption.”

Having a black dad and a white mom makes them seen as black kids in Canada. In Grenada, it was just the opposite. “On Salt Spring Island they see me as black, but I don’t think they treat me differently because of the colour of my skin,” Keshua continues. “In Grenada they did, but that was because they thought I was rich, and they will tell you that in your face. The biggest cultural difference between Canada and Grenada to me is the way people interact with each other. In Grenada they can be very blunt, and they are less sensitive. The whole time I was in Grenada I was White Boy. They like to give you nicknames. Everybody has one. If you you’re tall your Tall Boy or Big Boy. Nobody cares, it is kind of a nice thing, there is no malicious intent. I wasn’t offended by it. I grew up with a Grenadian dad, he can be blunt, I am used to it.”

His dad, who has been listening in the background, adds: “I think Canadians are more polite because there are so many different cultures here. The people of Grenada are a more homogenous group. Like being around family, it is easier to make jokes or give each other nicknames.”

The three of them went to a public school in Saint George’s, the capital of Grenada where their dad grew up. Keshua: “I had a hard time in the beginning, I felt very out of place. People in Grenada speak English, but they have a very strong accent and I could hardly understand them. I picked up individual words, trying to piece everything together. I had to say ‘what are you saying’ every five seconds.”

Going to school there was different from the experience they have in the Canadian school system. They had to wear uniforms, the boys had to keep their hair super short, which they weren’t happy about, and because of a teacher’s strike, they missed a lot of the curriculum. “I could live in Grenada after I graduate, but I would never go back to school there,” Levi admits. “I wanted to drop out of high school in April. Half of the time the teachers weren’t there, I wasn’t learning anything.”

The school they were attending even used physical punishment, something that has been banned in the previous century by many countries. Levi was included in that part of the culture at the end of the school year. “We were told to sit at our desks doing nothing when the teacher wasn’t there. When the vice-principle caught us standing up, we had to go to his office. We were there with fifteen or more students. It was kind of funny, but who laughed got double the licks, which means hit with a belt. The second time really hurt, but that was okay. I was curious about the experience; I hadn’t tried to avoid it.”

Two days before school ended, Levi dropped out of school after all. “My hair was too long and I had to shave it, which I didn’t want to. My dad supported me and wrote a letter to the principal, who didn’t give in. My dad let me stay at home for those last two days if I promised to do chores around the house. If I asked him if I could do something later, I could hear buzzing sounds from the bathroom,” he says with a big smile.

The Welch siblings had definitely more fun outside school. Levi: “We spent a lot of time at the beach. We loved the yellow sand and the warm water. Life happens on the beach in Grenada.” Keshua: “We were always there with a big group of guys, playing soccer, doing gymnastic stuff and flips off the dock.” They also enjoyed nature in Grenada. “We went on hikes in the rainforest, climbed mountains and on my birthday, we went to see wild monkeys. That was really fun,” says Zyah. “What I absolutely love about Grenada are the tropical plants and flowers that grow there, and of course the fruits. My favourite is the mammee apple, which is actually a berry that tastes like passion fruit.”

Before Keshua, Levi and Zyah went to Grenada, Grenadian culture didn’t play a huge role in their lives. “My dad is probably more strict than Canadian dads, but he isn’t very religious, he doesn’t cook – so we didn’t eat a lot of Grenadian food – and we didn’t celebrate Grenadian holidays or have a lot of Grenadian traditions. I actually felt more Dutch than Grenadian before we went to Grenada,” says Levi. Keshua and Zyah felt the same.  Zyah: “I had never been in Grenada, nor Holland, but I grew up with Dutch great-grandparents who live here on the island. I had more connections with the Dutch culture.”

Having lived in Grenada for six and a half months definitely changed that. Zyah: “I feel more Grenadian than before I left and less Dutch, that has shifted. But I would love to visit The Netherlands as well in the future. I think growing up with three different cultures is a big bonus. There are more things to learn and to experience and more places to go.”

Levi feels more Grenadian as well after the trip. “It is funny, I feel more Grenadian in Canada and more Canadian in Grenada. I like the directness of Grenadians but also the politeness of Canadians.”

Keshua: “It was a great opportunity to live in Grenada, to get to know the country, the traditions and my family better. I feel more in touch with my Grenadian side now. It feels more part of who I am and I am happy about that. In the future, I hope to live parts of the year in Grenada. I am honestly done with the long and cold winters in Canada, that is definitely where my Grenadian roots come to show.” 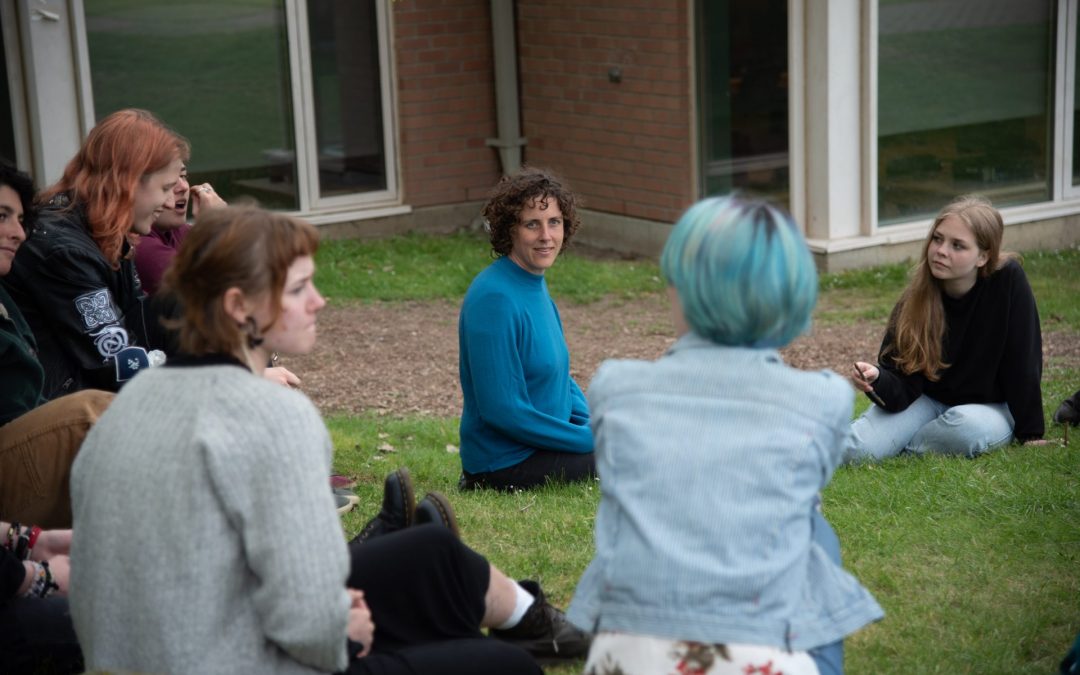 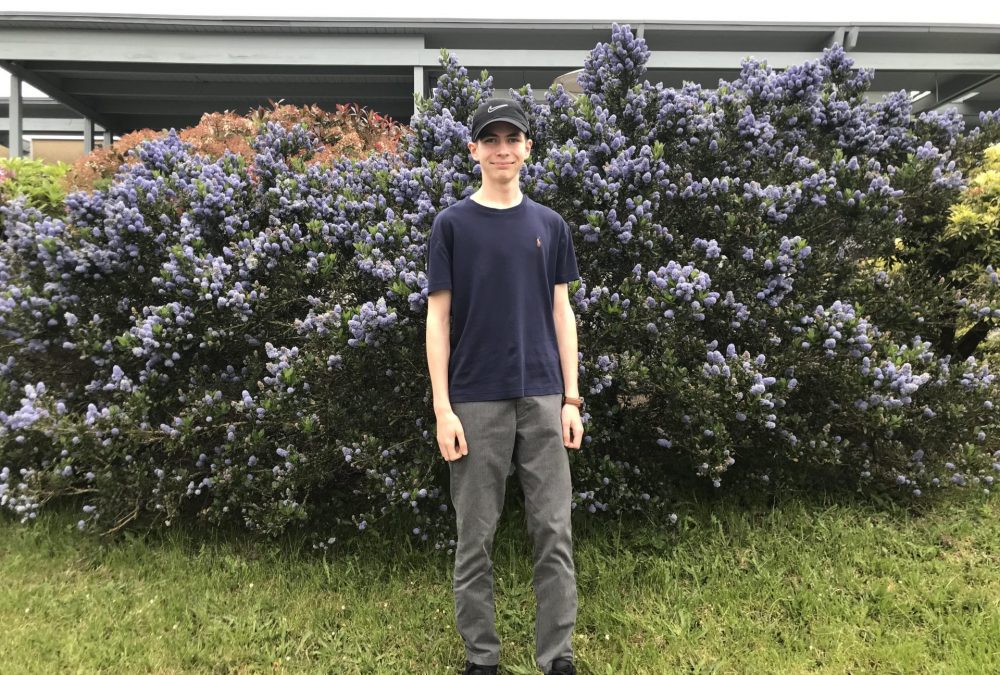 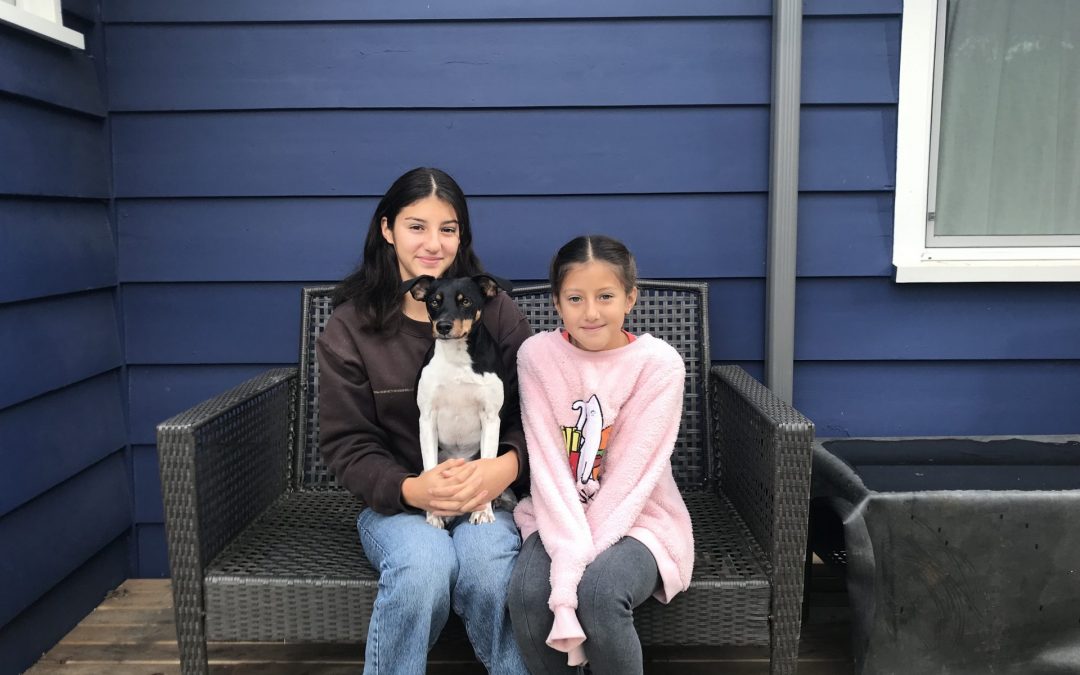 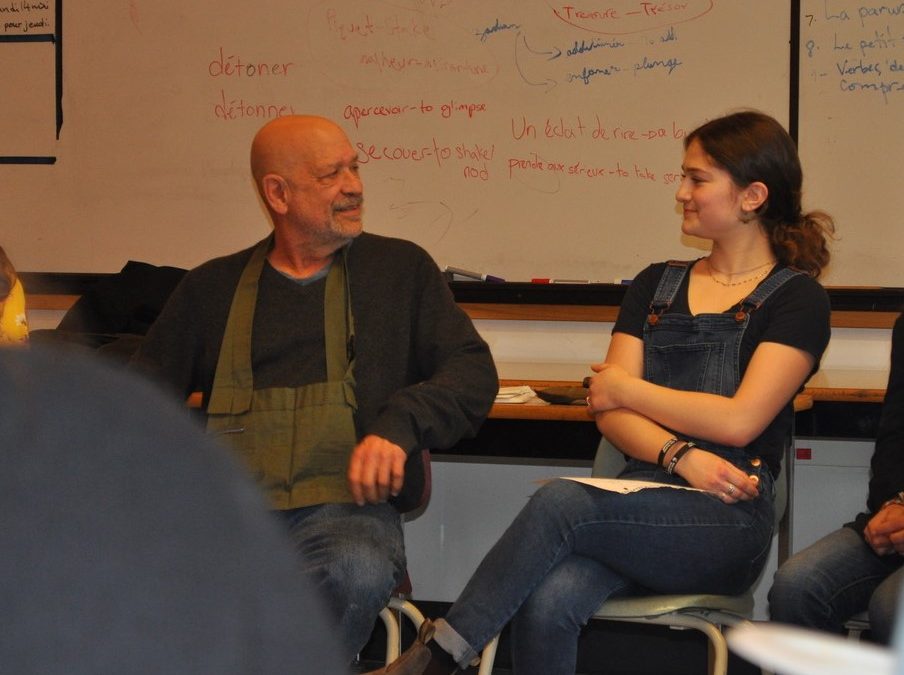 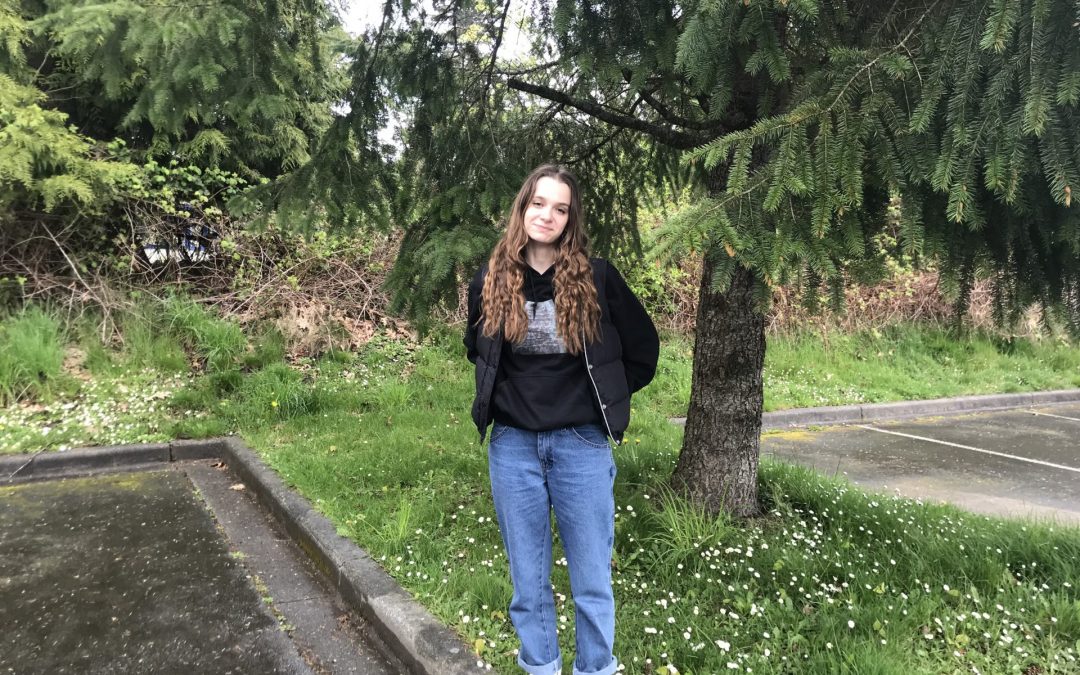